Nathanael Koenig is a multi-instrumentalist, producer, and music educator. Early in his career, Nathanael performed and recorded with various groups around the Midwest including: Project Mercury, The Authority Figures, The Jake Brisson Band, and his jazz trio.

After graduating from McNally Smith College of Music in 2014, he recorded an an album of original classical guitar compositions titled Along The Way and went on tour across the U.S. Since then, Nathanael has been based in Brooklyn, NY where he performs with a variety of groups and works in music education.

In 2018 Nathanael co-founded NY Music Cooperative, the first worker cooperative of musicians in New York state. The Coop's mission is to provide professional musicians control over their own labor while eliminating barriers to those seeking music education.

Nathanael's current musical focus is "En-Kay", an acoustic-electronic fusion project. The goal is to pair thoughtful songwriting and rich harmonies with a unique blend of organic and synthesized sounds.

Nathanael Koenig Group at The Shrine 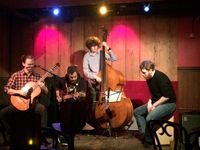 Nathanael Koenig and Aaron Quinn at The Gateway